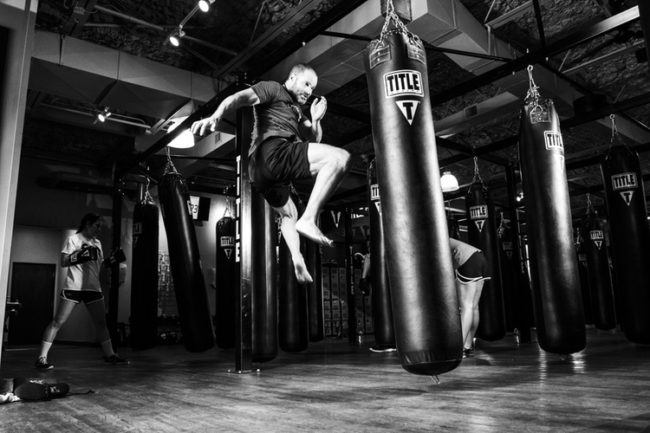 Trigger points causing pain and suffering are still being misdiagnosed because doctors and the medical profession in general are uninformed about them. The knot like characteristics of trigger points have been written about for over 150 years. They very often cause displaced pain because each one of us is connected from head to foot by a web of myofascial tissue. Janet D. Travell M.D. (1901-1997) generally considered to have been the leading authority and pioneer in diagnosis and treatment first used the term “trigger point” in print in 1942.

Too many people suffer needlessly and are living with pain that can be very easily treated using trigger point therapy. Many are even on the waiting lists for operations that quite simply shouldn’t be. I have successfully treated clients who have been awaiting operations for carpal tunnel syndrome, frozen shoulders, fibromyalgia, joint replacements and many more. They have made remarkable recoveries after trigger point therapy. People have always known about knots in muscles and the need for therapeutic massage/touch. What they havn’t known about is the way they connect with pain, especially displaced pain. By carefully studying myofascial tissue and using trigger point therapy we can successfully release tissue that has been “wound tight” for years. Also we are finding out the emotional content of this tightness. That is, the real cause, is also released which helps clients on many other levels too.

The pain inflicted by trigger points and tensioned myofascial tissue in general, may quite possibly be the biggest cause of disability and loss of time in a work place, the sporting environment or simply at home. Travell and David Simonds (another MD who has studied myofascial pain) have described trigger points as the “scourge of mankind.” Even children and babies suffer from trigger points.

Travell and Simonds define a trigger point as:

“a highly irritable localised spot of exquisite tenderness in a nodule in a palpable taut band of muscle tissue.”

They quote studies that suggest trigger points are a component of up to 93% of pain seen in clinics. Furthermore studies have shown they are the sole cause of such pain as much as 85% of the time (1992, 12;Gerwin 1995, 121; Fishbain et al. 1986, 181-197) I can also corroborate a very high percentage of clients I see suffer from trigger points and associated myofascial pain. Many of whom have other conditions relieved considerably when trigger points are dealt with.

Latent trigger points tend to accumulate over time. It is these that are causing people to have stiff joints and restricted movement rather than purely other conditions associated with being “older”. A good example of trigger points being the root of physical pain is the often misdiagnosed condition known as fibromyalgia. Many supposed sufferers are in fact afflicted with widespread trigger points. Even those genuine sufferers can have many myofascial trigger points compounding their issues. Trigger points effect movement by keeping muscles short and stiff. Movement requires that some muscles lengthen and others contract. Trigger points can prevent both. They can weaken muscles which will affect coordination, proprioception and mobility.

The Physiology of Trigger Points 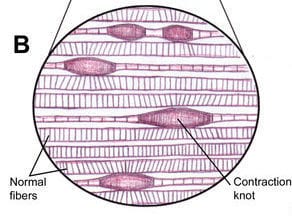 Each muscle consists of millions of fibres. In each fibre we have microscopic units called sarcomeres. Just to make a small movement in a muscle millions of sarcomeres have to contract. A trigger point exists when overstimulated sarcomeres become unable to release their contracted state. Physiological stress in the form of emotional turmoil, over training in the case of a sports person or even what is considered “everyday living” can over stimulate sarcomeres.

In the diagram we can see a group of fibres, some of which have trigger points. The sarcomeres are the small sections of each fibre. From one section to another defines the length of a sarcomere. In the knots or trigger points we have a group of sarcomeres which have contracted continuously to their maximum. The knot or bulbous area indicates how that section of the muscle fibre has drawn up and become shorter and wider. This puts a strain on other areas of the muscle fibre as indicated by sarcomeres which have been over extended. Trigger point therapy sessions address this issue by equalising sarcomere length.

Normally sarcomeres are like little pumps (so its not just the heart which pumps blood). When they contract and release they circulate the blood through capillaries. When a trigger point forms the resulting oxygen starvation and accumulation of waste products from metabolic processes irritate the trigger point even more causing pain. The muscle is then used less causing shortening of even more fibres. Since many muscles act on each joint, if one muscle is not working properly, this causes an ongoing and accumulative imbalance of many muscles not working properly resulting in more pain and lack of mobility.

Trigger points tend to originate in the center or belly of a muscle away from the attachments. This is where the motor nerve enters, bringing the signals that tell the muscle to contract. It is a primary location for trigger points because this is where sarcomeres tend to remain contracted. However it’s not quite as simple as this. Muscle fibres do not just conveniently run from one end of the muscle to the other. Depending on the function of the fibres they could be parallel and run from end to end (speed); or diagonally (power) for example. This could give the potential site for trigger points at various places along the muscle as there may be more than one center or belly.

To treat pain using trigger point therapy it is not necessary to know the mechanism by which satellite pain is referred to other areas of the body. There is much debate about this mechanism. However one thing is for certain we are connected from head to foot by a network of myofascial tissue. This tissue is interconnected on multiple levels therefore its not hard to understand that problems in one area of the body will effect another. One of the simplest explanations is that pain signals get confused in our complicated neurological wiring. It is possible for one electrical signal to be influenced and modified by another, say for example if myofascial tissue is restricted and “wound up”.

This referred pain follows very predictable patterns in all of us. This has lead to particular areas of pain being cross referenced with certain negative emotions. These emotions are often released when particular trigger points are dealt with and again shows the multidimensional nature of our existence. We are gradients of energy finally manifesting as physical bodies.

Trigger points in the tiniest of muscles can cause a huge amount of pain often referred to other parts of the body. For example, headaches, including migraines, sinus pain, jaw, facial neck and even throat pain. Any stiffness in joints is very often associated with trigger points elsewhere. Back pain always has a myofascial component no matter how worn, displaced or athritic your “discs” are. Lower back pain is very often referred from buttocks, psoas, inner thighs and so on. Intrapelvic pain can be relieved after a trigger point therapy session. Even gynecological problems can clear up rapidly after a trigger point therapy session. Very often symptoms that appear to be coming from inside such as stomach ache, vaginal pain and so on is actually referred pain from external muscles.

As a therapist working in Orgiva and other locations I am very aware of the need to use trigger point therapy alongside myofascial release techniques. Very often tissues have been wound up so tight that neighbouring structures including organs, nerves and arteries are affected. Chronic issues can become so bad that the correct alignment of the whole body structure is impeded. Myofascial Release Techniques can then be used to “unwound” tissue and whole areas of the body. This then allows the flow of chi to go unimpeded and a rejuvenation affect is achieved. Chronic issues are always effected by an emotional patterning therefore intuitive and integrative modalities are always recommended during the treatment. This means clients can be treated personally in the present moment and not generically in the past.