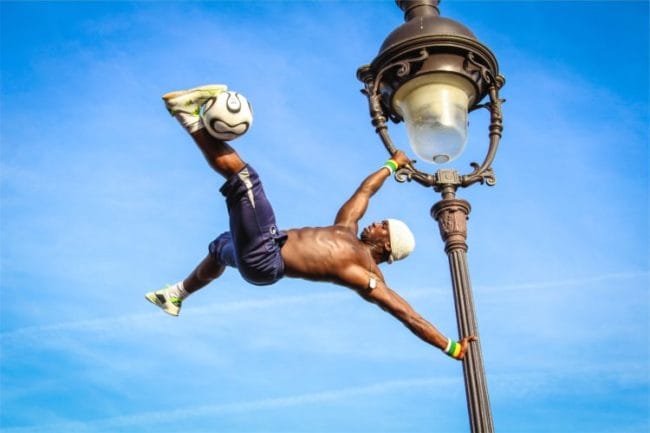 My philosophy as a therapist is always of integrating modalities. The benefits of which are profoundly demonstrated by integrating a technique known as myofascial release (MFR) into any treatment. In the human body the fascial system is a totally connected system of tissue. It connects from the inner aspects of the skull, for example the temporomandibular joint, to the soles of the feet. This web of myofascial tissue is three dimensional in nature. It envelopes and entwines all other tissues in the body, from single cells in different tissues to whole organs and muscles. Any negative deformation or twisting of this fascial network has a local and distal effect on the physical body. This affects the efficiency of movement and will eventually cause pain.

Fascia permits the body to retain its normal shape. Imagine removing your skeleton and hanging yourself on a door hook. The myofascial tissue alone would keep the integrity of your body shape including the locality of all muscles and organs. It is immensely strong, and when it becomes restricted from trauma (especially negative emotions) it effectively becomes a straight jacket with a pressure of up to 2,000lbs per square inch. Quite incredible then that the fascial network has been left out of many anatomical pictures and models. This has resulted in too much of a focus on muscles and the skeletal system when physical treatments are applied.

Myofascial tissue functions in many different ways to support the body therefore if there is a restriction in it (everyone has restriction) it can have a profound effect on our daily lives: 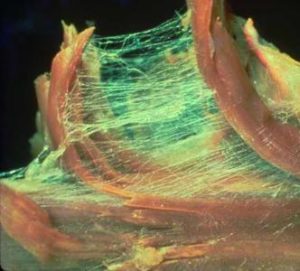 1. The most obvious function is that it protects and supports the body. It is extensively attached at many different levels to cells, muscles, ligaments, bones and of course organs including the heart. It is not surprising then that it has such a huge effect on our bodies in general;

2. Myofascial tissue is actually an energetic communication system. It is our largest and most neglected organ and is a matrix of connective tissue, or membranes that envelop every organ, muscle and bone. Communicating via crystalline liquids it plays a major role in keeping open the flow of Qi between organs. It is in fact the Triple Burner (Triple Heater, Warmer or Energiser) spoken of in ancient texts;

3. Myofascial tissue moves in response to muscle activity. Research has shown that numerous neural structures exist in fascia relating to both proprioception and pain reception;

4. Myofascial tissue is involved in proprioception. Therefore it’s not such a large jump in understanding to realise that it is involved in bio-mechanical movement since both fascia and muscle tissue are inseparable;

6. It provides shape to the body in the form of the characteristic contour of limbs and organs. This is why myofascial release techniques can have such profound effects on the body. They allow an unwinding response which helps the body move back into it’s “divine blueprint”;

7. Superficial fascia allows for fat storage and aids in the conservation of heat;

8. Myofascial tissue is the main area for the repair process after injury. This tissue aids in the repair of injuries by depositing collagen fibres, more commonly called scar tissue;

9. The ‘defence’ characteristics of myofascial tissue includes functions related to infections and toxemia;

10. Myofascial tissue absorbs shock and holds these forces as restriction within the local tissue. This ultimately affects the larger network causing impairment of function;

11. Myofascial tissue reflects the cranio-sacral rhythm (4-14 cycles per minute). This explains the reason why after adjusting/treating the sacral area for example, the cranial area should also be adjusted.

The Myofascial System and the Body/Mind Connection

The myofascial system plays a huge part in the body/mind connection. This web of connective tissue has the ability to retain memory of past events therefore trauma of any type can also be retained within the system. Memory can be in the form of negative emotions from the past and since everything is energy the myofascial tissue can contain this energy. Since ALL cells in the human body contain ‘mind’ we can see how releasing restrictions in the myofascial tissue can release emotions and bring up past trauma for resolution.

How does it do this?

Part of the flight or fight response is to “freeze.” In the animal kingdom, once the danger has passed, the animal simply shakes itself to bring homeostasis back to the body and various systems. It doesn’t have a belief system to how it should react! However in our stressful and belief filled world we are constantly in this fight or flight mode. We never bring our bodies back to homeostasis simply because our belief tells us its not appropriate, for example by crying or creating a scene in public. This emotion then becomes stuck in the body/fascial network. This leads to further dysfunction because the body is trying to tell us that it needs to come back into balance.

A Return to Our Divine Blueprint

The unwinding process via myofascial techniques (MFR) release emotion from the tissue as the tissue returns to its divine blueprint. Since the movement comes from the unconscious mind it will never re-traumatise. The memory is being dealt with in the present and the body/mind complex spontaneously releases it by bringing it to conscious awareness. This is the place where it can be processed allowing the client to heal. Many clients laugh, cry or shake when techniques are applied and all know that a healing is taking place. However it is not necessary to feel any emotional response whatsoever.

This is an incredible technique to both administer and to watch. Few therapists use it or are even aware of it.

The myofascial tissue network is the ‘hidden connection’ between physical and energetic treatments. It is plausible to assume that more energetic treatments can be less effective simply because myofascial tissue is in a state of tension/trauma. This blocks energy pathways or meridian lines. This assumption is made whilst recognising the ‘intelligence’ of light photons/packets and their ability to work on a quantum level.