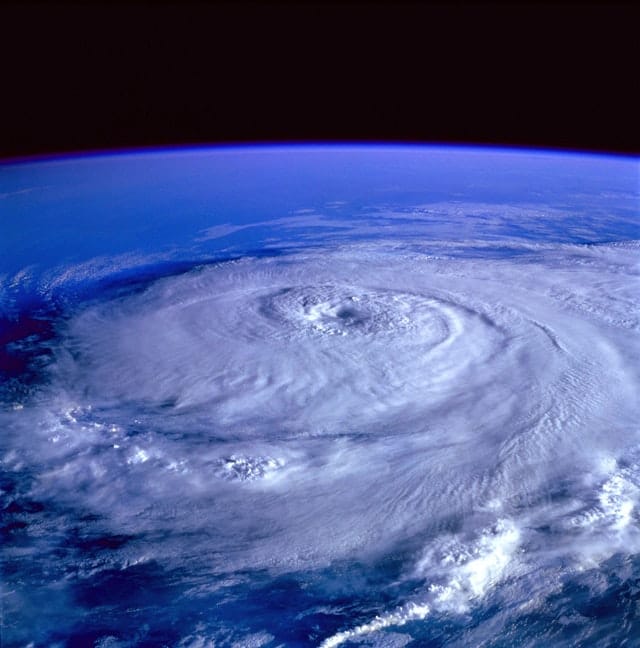 The human electromagnetic field is that part of the universal energy field that is associated with the human body. It is also called the lightbody. It interpenetrates the human physical body. Each successive layer emits a finer and higher frequency of vibration than the previous body that it surrounds and interpenetrates. A favourite model describes the human electromagnetic field as being made up of seven ‘layers’ called bodies. This is based on observation and research.

Each successive ‘layer,’ or body, includes previous ones and all bodies interpenetrate the physical body. Understanding this is important. These bodies are defined by location, colour, brightness, form, density, fluidity and function. They will be perceived uniquely by each individual. This will be according to his or her own frequency of vibration and what particular “function” the individual soul is performing. In other words just like the bigger ‘reality’ the human electromagnetic field is discerned subjectively. There are however traits that are common to most people who can perceive it. 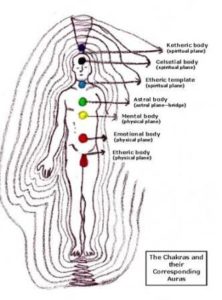 It is of the utmost importance to understand that the ‘layering effect’ of the Human Energy Field, that is the physical, etheric, emotional, mental, astral and upper spiritual plane bodies is not a layering effect at all. It is a more expansive version of ourselves which carries inside it the more limited forms. We should not be imagining it as an onion where you can peel away layers.

There is a vertical flow of energy which pulsates up and down the field in the spinal column. This etheric channel passes from the root of the cord in the sacrum along the whole length of the spinal column into the medulla oblongata and brain. This canal is the vehicle for the creative life-force. This energy extends above the head and below the root chakra in the coccyx area. Chakras are swirling cone shaped vortexes interpenetrating this field. They have open ends of which extend to the edge of each layer of the energy field they are located in. Each of these open ends in each chakra are the ‘Seals’ that are spoken about in esoteric texts.

Chakras and The Human Electromagnetic Field 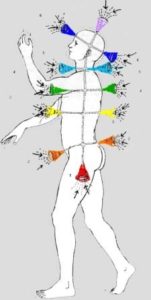 Each major chakra on the front of the body is paired with its counterpart on the rear of the body (see diagram). The frontal aspect of each chakra is related to a beings feelings and the rear to his will. The upper three on the head are to do with mental processes. During this transitional period we are moving out of the head and into the body. We are distributing our awareness to the other two brains. These are the heart and second brain in the abdominal area. The second brain actually innervates the heart brain. Humanities’ focus is still in the head area which is causing a huge imbalance in the body. We are forever thinking!! Moving ones focus to the abdominal area, second brain or Primal Area is now a must for humanity. Abdominal breathing is one very effective way of doing this.

Wherever we focus we draw a huge amount of energy to that area.


Each chakra has seven layers each corresponding to a layer of the auric field. In order for energy to pass from one layer to another seals have to be open in the roots of each chakra. It is common for many of these seals to be closed. These seals are being broken for those who are working on themselves or evolving/ascending. A deeper understanding and connection is being achieved to higher aspects of self.

Each chakra or vortex acts in a similar manner to a whirlpool or tornado. It sucks universal energy into itself and distributes it throughout the body.

Individual Chakras in the Aura

ALL Dis-ease is Related to a Dysfunctional Human Electromagnetic Field

Each vortex or chakra exchanges energy with the Universal Energy Field. All vortices including smaller chakras and even acupuncture points are openings for energy to flow into and out of the aura. When we remain ‘open’ in attitude we are quite literally opening up our vortices to universal energies. Since most of us have spent lifetimes being ‘shut down’ to varying extents because of family patterning it is essential that we now keep ourselves as open as possible. This allows old dysfunctional energies ie subconscious beliefs and unconsciousness, to be released and renewing energies to enter our human electromagnetic field.

Working on a particular growth process that we feel we are in corresponds to different vortices or combination of vortices. As more ‘junk’ is released more universal energies can be drawn in and more realisations and discoveries about self will take place. The path back to wholeness is not easy and so may often feel chaotic. However, we have the chance in this lifetime to accelerate our growth exponentially.

The passageways which lead from one field to another are Sealed or closed in most people. This is because we descended into a very low frequency existence of physicality and duality. They open as a result of spiritual purification work, since the chakras serve to vitalise the body they are directly related to any pathology in the body. Each chakra absorbs universal energy and sends it along nadis or meridian lines to the nervous system, the endocrine system and then the blood.

The more open we are and the more energy we allow to flow into our energy system via all vortices, the healthier we become. This is a process as humanity has shut itself down to such an extent that disease is increasing exponentially. Individually, until people take charge of their lives and take responsibility for all their thoughts, emotions and mis-creations we have no option but to depend on institutions and powers outside of ourselves. This lack of flow in the human electromagnetic field is responsible for all our perceptions and distorted thoughts which interfere with our experience of a full life.

The Functions of the Chakras

The chakras of the human electromagnetic field have three major functions:

1. To animate or vitalise each auric body or field and therefore the physical body;

2. Each chakra is related to specific psychological functions. Therefore an increasingly open and proper functioning chakra will develop specific aspects of self consciousness in that particular chakra;

3. To transfer energy between the different auric levels. Looking at pictures of the seven major chakras it is easy to think that there is only one set belonging to the physical/etheric body. However, what is not understood by many is that each chakra is subdivided into seven chakras. Each is connected to it’s specific auric body and each chakra rotates at its own increasing frequency compared to the lower one. For example, with reference to the heart chakra the lowest frequency chakra would be connected to the etheric body, the next higher frequency chakra would be connected to the emotional body and so on.

The Process of Energy Transfer

So we have Universal Energies coming into each vortex and major chakra, being processed and leaving as secondary energies. These secondary energies are transported along meridian lines or nadis to the nervous system. From there onto the endocrine system where various hormones are produced to regulate the body and physiological processes and finally arriving into the blood.