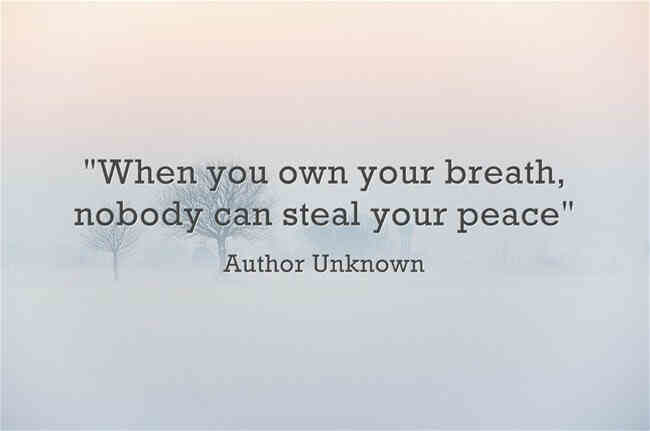 Diaphragmatic breathing is our natural breathing pattern. When we breath the body this way in every moment we have returned to our enlightened state of being.

“No one has form without breath. Consequently, breath and form must be accomplished together. Isn’t this evident?”

Master Great Nothing of Sung-Shan, Taoist Canon on Breathing

We are a product of our social engineering and unfortunately have been grossly misled. No where can this be seen more profoundly than in the ignorance of our education and health systems. This ultimately is ignorance of our own bodies and breathing mechanism which leads to a dependency on others to “fix us”. We were never taught to experience our own breathing patterns and anatomy as part of our education. Instead we were simply given information to memorise and learn. Diaphragmatic breathing, often called abdominal breathing is natural breathing. It is the way we breathe the body when we are at peace with ourselves. It should be our predominant way of breathing. For billions of people it isn’t and as such the illusion of life is created. All suffering in any form can be accredited to breathing patterns other than diaphragmatic breathing.

It is our cells that require oxygen 24/7 and it is our cells that are deprived of oxygen when we develop unconscious breathing patterns via cellular memories and unconscious beliefs and perceptions about life. These “ways of being” are then hard wired into our nervous system which affects all systems of the body especially our endocrine, musculoskeletal and respiratory systems.

Oxygen is carried on the back of hemoglobin in the blood until it reaches the capillaries. Here it is given up into the tissue and exchanged for carbon dioxide. This deoxygenated blood, which looks bluish, travels through larger and larger blood vessels until it reaches the veins and is carried towards the heart. From here it is pumped out to the lungs to receive new oxygen and start the whole process again. If we have unconscious breathing habits and especially when not engaged in diaphragmatic breathing we will deprive our cells of life giving oxygen. 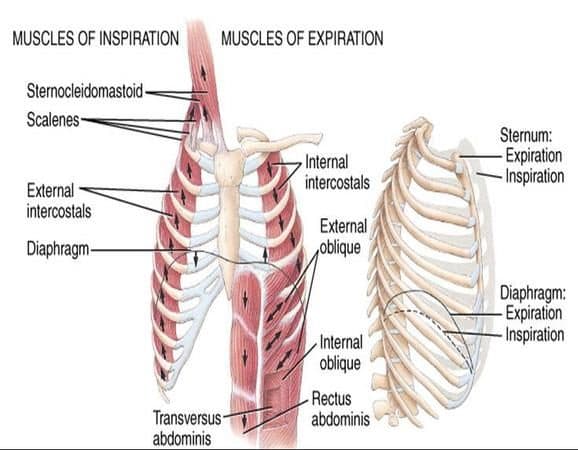 It is our respiratory muscles that bring air into the body. We have both primary and secondary muscles. The primary are clearly the essential muscles and must be used predominantly. They lie lower in the trunk and are very powerful because they are “supposed” to do the bulk of the work. The most powerful and of chief importance is the diaphragm. It is this muscle that is responsible for 75% of all respiratory effort in the person who does diaphragmatic breathing. All superior states of health and siddhis (“superhuman” achievement or states of being) are related to the correct use of this muscle and diaphragmatic or abdominal breathing.

Unfortunately in all modes of dysfunctional breathing which is affecting the majority of the population this role is reversed. The secondary muscles which are higher up are being used predominantly causing upper body tightness. Their roles should never be reversed. Yet that is the condition that is affecting the human population and all health problems. Diaphragmatic breathing must be our predominant breathing pattern 24/7. When our breathing is brought back down into the lower body we become more grounded. We get in touch with our feelings and follow our “gut instinct”. Our primary awareness is then in the lower “Dan Tien” or second brain.

Diaphragmatic breathing must be done through the nose. There are numerous reasons for this. The most important of which is to encourage the retention of CO2 (Carbon Dioxide) which stimulates the breathing mechanism. Inside the mouth, nose and bronchi scientists refer to a “dead space”…..

“This space helps to preserve additional CO2 for the human body to invest elsewhere. During inhalations we take CO2 enriched air from our dead space back into the alveoli of the lungs. When the mouth is used for respiration, the dead space volume decreases, since nasal passages are no longer a part of the breathing route. Consequently, air exchange for mouth breathing is stronger since air goes directly from the outside air to the alveoli. This reduces alveolar CO2 and arterial blood CO2 concentrations. Such an effect does not take place with nose breathing.”

There is a modern school of thought sometimes referred to as New Age that has no underpinning satisfactory evidence scientific or otherwise for its ideas. For example in certain yoga circles it is stated that we should all be breathing more deeply. This is incorrect and indeed does not tally with much older systems of yoga which have been valid for thousands of years such as:

The Yoga Sutra of Patanjali (4th-2nd century BC) which states:

“Pranayama is the cessation of inspiratory and expiratory movements”

“7. Wherever the yogi may be, he should always, in everything he does, be sure to keep the tongue upwards and constantly hold the breath. This is Nabhomudra, the destroyer of disease for yogis.”

There are numerous other examples in traditional yoga texts that talk of the cessation of the breath.

On another note the tongue held upwards against the roof of the mouth creates a circuit for life force energy to move around the microcosmic orbit as it did in the womb and before lung breathing. The Taoists speak extensively about this mechanism and there are numerous practices in my Self Mastery Course to that end.

Deep diaphragmatic breathing through the nasal during increased exertion is not a problem. However deep breathing using dysfunctional breathing patterns is. Habits such as chest breathing through the mouth actually lowers oxygen levels in the body. This will attract disease if practiced unconsciously in the longer term. The reason for the decreased levels of oxygen while breathing this way is because CO2 actually decreases in the lungs and arteries. Since CO2 is required to stimulate breathing in the first place it is important that CO2 levels are kept as high as possible. There is a misunderstanding about CO2. This is probably because CO2 in its pure form is toxic to humans. However it is only when CO2 levels rise above 20% that adverse effects take place in the human body.

“Hypocapnia (CO2 deficiency) in the lungs and, in most cases, arterial blood is a normal finding for chronic diseases due to prevalence of chronic hyperventilation among the sick.”

“Modern people breathe about 2 times more air than the medical norm….. Hyperventilation causes alveolar hypocapnia (CO2 deficiency), which reduces blood flow and oxygenation of the diaphragm muscle, while arterial hypocapnia makes smooth and skeletal muscles tense, the diaphragm included. If you were to take a close look at some old movies, you would hardly see any chest breathing at all……. Hyperventilation makes modern people oxygen deficient and this makes them chest breathers. Therefore, automatic (unconscious) diaphragmatic breathing is very rare these days…….”

“All chronic pain, suffering and diseases are caused from a lack of oxygen at the cell level.”

It is also interesting to note that politicians use these facts to manipulate consciousness. This is to bolster their own global warming agenda. The planet is going through a natural evolutionary process of increased CO2. Indeed it is very much part of the “awakening process” that is causing the breakdown of dysfunctional systems of control.

Dr. Artour Rakhimov has written about this:

“Contrary to what might be expected from environmental concerns related to global warming, CO2 (carbon dioxide) health effects and benefits for the human body are innumerable. Life originated and had existed on Earth for millennia under conditions of very high CO2 content of the surrounding air. According to published studies, CO2 content was up to about 7-12% in air when the first creatures with lungs were evolving.”

Practicing techniques such as diaphragmatic breathing are important. However it is necessary to understand that when the session has finished people will move back into their “hard wired” dysfunctional patterns. Therefore the practicing of techniques is only a learning process. The real work begins when we consciously practice those techniques in every moment and they become automatic. This in most cases is about a complete change in focus in ones life and the taking back of our energetic sovereignty. When we do this we can’t help but become healthier and release our dysfunctional patterns.

The body follows the breath therefore if the breath is restricted the body will be restricted. Many upper body, hip and back problems can be accredited with the diaphragm/breath not being taken fully into the lower trunk area. The individual then develops chronic chest breathing or similar dysfunction. Visiting a therapist can provide relief because anatomical structures can be moved back to where they should be. Frequently this is only a short term solution. Often the breath and emotional content of the dysfunctional pattern may not have been addressed. Emotional patterns will still be held within the myofascial tissues. It is therefore essential that the therapist is aware of this mechanism.

When the breath is taken fully into the abdomen the body loosens its hold on itself. Upper body respiratory muscles relax. The tightness held in the hips and lower back soften and the pelvis no longer tilts. The hip flexors and especially the psoas lengthen naturally instead of having to be periodically worked on by a therapist.

Diaphragmatic Breathing in Every Moment

As I wrote previously diaphragmatic breathing should also be the breathing pattern one adopts 24/7. That includes during exercise. During exercise one should also use nasal breathing. Breathing through the mouth reduces CO2 and NO (Nitrogen Oxide – an important vasodilator of arteries and arterioles). Diaphragmatic breathing produces the ideal mechanism for maximum oxygenation of arterial blood which is 98-99%. It also ensures the efficient drainage of lymph from the abdominal area as 60% of lymph nodes are located under the diaphragm. Full diaphragmatic breathing ensures that all organs including the heart are massaged, rolled, churned, and bathed in new blood, fluids and oxygen. The organs get squeezed and released like sponges.

Diaphragmatic Breathing and The Future

Our medical practices have become more technologically based, many illnesses that simply need breath retraining are being treated with drugs. Since 90% of all drugs are cell inhibiting rather than cell promoting this is a very serious problem. Long term usage of drugs actually increases morbidity and mortality rates. I would guess that once statistics are in for the last few decades the medical profession (not individual doctors) and pharmaceutical industries may be responsible for the largest amount of human deaths in the history of mankind. All because they didn’t teach patients diaphragmatic breathing through the nasal as an important part of our education. The word doctor comes from the Latin verb ‘docere’ which means to teach. Clearly some doctors are doing their best within a dysfunctional system however it remains for humanity to wake up to the healing mechanism of diaphragmatic breathing.

We are moving into a new epoch, one in which common sense and wisdom will again see the light of day as the monkey mind is transmuted. During the previous epoch the cerebral brain has been developed to its maximum by our constant attention to it. It is quite clear that this lopsided development is having adverse affects on the human race and the planet. It is time to focus on our other brains too, the heart brain and the second brain. In this way balance can be brought back to each of us on an individual level. As this happens our dysfunctional societies and the planet benefit enormously. For this to happen we must remember diaphragmatic breathing. I want to highlight the quote at the beginning of this article. It’s profound in its simplicity. We as humans make life too complicated by being stuck in our heads.

“No one has form without breath. Consequently, breath and form must be accomplished together. Isn’t this evident?”

Master Great Nothing of Sung-Shan, Taoist Canon on Breathing.